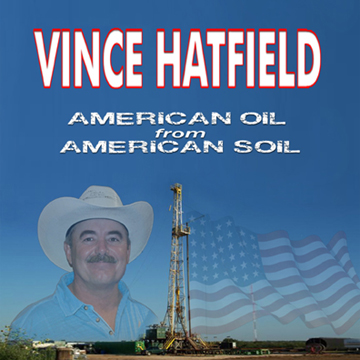 American Oil From American Soil  is the newest release from Texas singer/songwriter Vince Hatfield. Vince was born in the rich oil area of Snyder, Texas near Midland, Texas. His first job included cleaning the inside of old oil tanks. It was these roots that helped him put his heart into his newest release. Working in the oil industry, Vince understands what it means to work hard and how primarily the Saudi's manage to manipulate the oil industry at least once every decade by flooding the markets with their oil. When the USA starts to become closer to being energy independent from imports, this causes all the working men and women in the oil industry here in the United States to suffer severely. He felt he needed to express the frustration that not only he feels, but also and especially for all those hard working men and women of the oil industry and the effect it has on all those families across America.

Vince says, "We have such a wonderful Country, and we need to keep America free." Although Vince's song American Oil From American Soil, mentions only the West Texas rigs and oilfield, he wishes to point out that there are now many other oil producing states that also suffer from these ongoing downturns of the oil industry, which occur much too often.